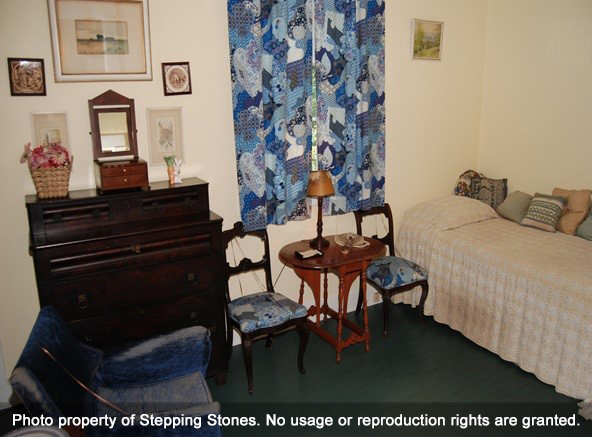 “Helen’s Room” is named after Bill Wilson’s half-sister, Helen Wilson Riker. Helen was sixteen years younger than Bill. She lived with the Wilsons at Stepping Stones for a long while, so the siblings became close in adulthood. She worked in the subscription department of The A.A. Grapevine magazine and went on to marry one of Bill’s fellow Alcoholics Anonymous members.

Many guests stayed for long periods of time – even multiple years – with the Wilsons. Sometimes Bill and Lois rented a bungalow outside of town just to have some time together away from long-term company. Among the many guests to stay more than a year were Ebby Thacher (Bill’s sponsor) and Bill’s cousin Howard. Howard was brought to Stepping Stones to sober up and ended up staying seven years.

Lois had an elevator installed when she was in her nineties in the 1980s. Guests actually walk through the elevator to enter the guest room. The elevator helped Lois to the second floor of the house, which was her favorite part of the house and the first office of Al-Anon Family Groups.